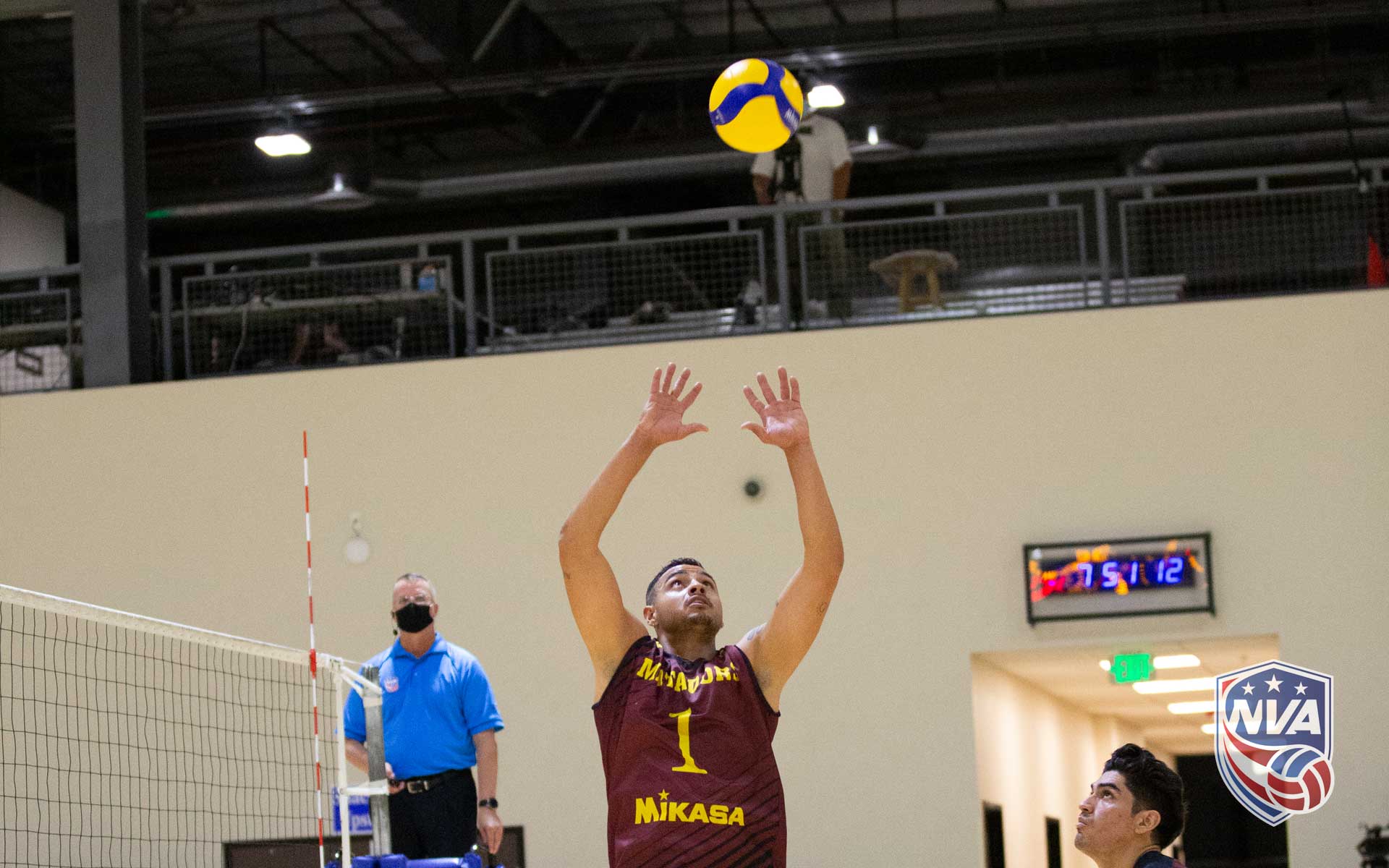 Matadors came out hot in the first set and took an early lead, which they kept throughout the first set. OPP Jacob Vander Beek was the spark plug for the Matadors with his 3 kills and defensive digs. Good play by the Libero, Jose Mulero, helped keep the Matadors in system and also helped them play well in transition to secure a 25-20 win.

In the second set the Matadors continued their strong play early in the set. Kills by Matador MB Martin Petris kept the score close early in the set. But at 9-9 Stingers kicked up their game with strong play from OH Jake Langlois, OH Inovel Romero and OPP Jorge Mencia. Matadors attempted a comeback after a block at 18-17 but Stingers’ kills by Romero and Mencia extended the lead to four points and they won the set 25-20.

In the third set the Stingers’ steady play and service run by Langlois, which included an ace, built a three point lead of 7-4. Then back-to-back Stinger hitting errors and kills by Petris, OH Mauro Issac and Carlos Serrano cut the lead to 13-11. But Langlois’ steady play that included a variety of kill shots kept the Matadors from mounting a comeback. Stingers won the set 25-20.

In set number 4 the Stingers pulled away at 6-6. Setter Leo Durkin, who did a great job setting the ball in good locations for his attackers to hit, continued to share the wealth with his hitters and OPP to close out the match at 25-14. For the Matadors Petis led with 10 kills, Vander Beek and Isaac 6 kills and Serrano 5 kills. Langois led the Stingers with 15 kills, Mencia 10, Romero, 8 and MB Alex Shmelev, 5 and MB Rusty Lavaja, 4.

Matadors Defense and Digs Big Factor in Win Over Blaze

Blaze started the set strong with kills by Pedro Nieves, Joseph Cuevas, Travis OZ’Gorman, while Matadors scored kills by Martin Petris, Mauro Issac, Carlos Serrano and a block by Petris to take an 8-7 lead. At the second media time out the Blaze took the lead 16-15 but after a string of hitting and serving errors the Matadors regained and extended their lead on an ace by Gilberto Sanchez, two kills by Jakob Vander Beek, Issac, Petris, Serrano and an ace by Issac to 20-17. Blaze attempted a comeback with two kills by Cuevas and an ace by Nieves. But the Matadors finished the set with a kill by Vander Beek, Petris, Serrano and Issac ace to win 25-20.

In set two the Blaze started Charles Belvin, who turned out to be a spark plug for their offense. Buggs set Belvin the first ball and he responded with a kill that pumped up his teammates. While the Matadors struggled to side out, the Blaze took advantage of free and down balls by the Matadors and followed with kills by Travis O’Gorman and Nieves; and a Buggs ace and another kill by Belvin that built an 8-5 lead. After the time out the Blaze extended their lead with an ace by Nieves, two kills by Jordan Walley and Belvin block to 12-6. Matadors attempted a comeback with kills by Vander Beek and Issac but Blaze kept their six point lead on kills by O’Gorman, Belvin and Nieves to 16-10. Matadors attempted a comeback with three consecutive kills from Issac but the Blaze hung on and finished the set with a kill by O’Gorman to win 25-17.

In set three hitting and service errors by Blaze got them off to a bad start, while Matadors responded with kills by Issac and Petris, two kills by Vandeer Beek and blocks by Petris and O’Gorman and took a three point lead at the first media time out 8-5. Blaze rallied back with two kills by Rodriguez and Belvin and a kill by O’Gorman and Nieves and tied the set at 13-13. But thanks to a setter dump by Gilberto Sanchez and kills by Issac and Carlos Serrano the Matadors took back the lead at 16-15. Both teams sided out well with kills by O’Gorman, Belvin, Rodriguez and Nieves for the Blaze and kills by Vander Bees, Issac and Sanchez for the Matadors. At 23-22 the Matadors closed out the set on kills from Issac and Vander Beek scored the set point on a kill 25-22.

Set four was a mirror image of set three. Blaze started off strong again with kills by O’Gorman, Rodriguez, and Nieves; and a block by Rodriguez. Matadors countered with  an ace by Serrano, kills by Issac, Petris and Vander Beek to lead 8-6. After the time out Matadors kept and added to their lead on three consecutive kills by Vander Beek. Both teams sided out well. Blaze with kills by Belvin, Buggs and Rodriguez and Matadors on kills by Brett Massetti and Vander Beek. Although O’Gorman scored three consecutive kills, it wasn’t enough for Blaze to make a comeback. Vander Beek caught fire again and scored back-to-back kills to 24-22. The set ended on a long rally and the Matadors won the match on a Belvin hitting error 25-22.

Belvin and O’Gorman led the Blaze with 13 kills each, followed by Rodriquez with 9 and Nieves 6. And Blaze hit 43%.

Matadors’ Issac led all players with 17 kills, Vander Beek 12 and Petris 6 and Matadors hit 41%. In addition to his kills, Vander Beek’s defense played a major factor in the Matadors’ win. He had double digit digs. In 2 rallies he had back-to-back digs and another rally he had 3 digs.

The last NVA match of the weekend ended like it started with a five setter. Matadors started Mario Meza at Libero. While Matadors started with good play, Southern Exposure struggled to pass the ball and also committed several hitting errors. Matadors also scored points on kills by Jesus Serrano and a Carlos Serrano service ace to lead 8-3. Although Southern Exposure finally cleaned up their play with dump kill by setter Derek Sullivan and kills by Tyler Neil-Hubbard and Jakub Ciesla, Matadors added another point to their lead on a kill by Jacob Vander Beek, two kills by C. Serrano and Martin Petris ace to 16-10. Southern Exposure chipped away at the lead with two kills and a block by Eddie Moushikhian and Tim Lourich block for a 16-14 score. But thanks to Southern Exposure’s hitting errors along with Matadors’ kills by J. Serrano, middle blocker Brett Massettti and Mauro Issac Matadors took the lead back and added to it to 23-19. A Southern Exposure hitting error and double trickle net service ace by Issac won the match for the Matadors 25-19.

Matadors finished the weekend with a record of 1-3 and Southern Exposure 2-1.

previous
A Thank You to our Sponsor DSM
next
The Matadors Make Their First Statement That They Should be the Kings of So-Cal
PRIVACY POLICY
TERMS & COND...