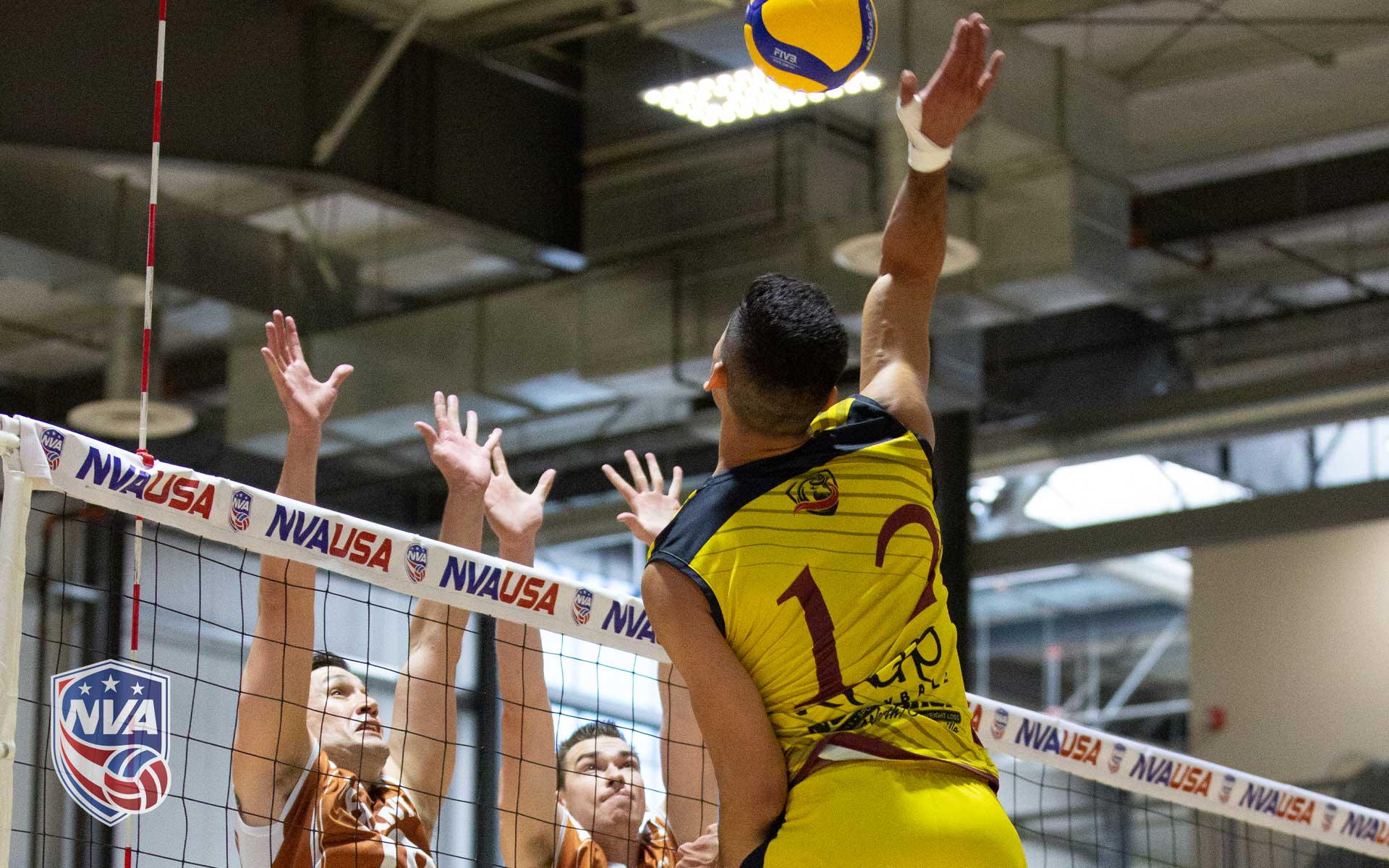 The Ramblers finished with the best record in the NVA at 7-2. Despite their two losses, one of which was against the Dallas Tornadoes’ who were last place, this team is full of talent. The team is currently lead by Brandon Rattray, who has been the best transition player in the NVA, leading the league in kills since the beginning of the season. Now, at 143 kills averaging 6.5 a set, Brandon has almost a 40 point lead over the kill leader, Tyrant’s Gianluca Grasso. Ryan Manoogian and Ryan Mather have played a significant role in scoring points when Ramblers are out of the system by extending rallies in the back.

While the Ramblers rely on Rattray to score points, their setters have plenty of other hitters to feed. Having Kevin Lopez and Kyle Radecki on the pins and a deep middle roster with Antwain Aguillard, Sean Dennis, Mark Lane, and Josh Duarte, the Ramblers are favored to win the championship. This team also has a unique lineup that juggles three different setters in Michael Keegan, Tanner Maxwell, and Steven Duhoux, which has worked surprisingly well.

After the Ramblers defeated the Stingers 3-2 in May, they established themselves as a front runner to win the 2021 NVA Championship. Yes, they lost the next two against the Stunners and Tornadoes. However, the Ramblers could still bounce back to defeat Team Freedom and the Matadors to finish the regular season.

The Ramblers have also been injury-free all year, which is a plus because they don’t have a full bench like the Stunners or Stingers.

The Matadors had a disappointing season but managed to fill the last spot in the playoffs. All season the Matadors struggled to find a consistent lineup and never got into a rhythm on offense. They’re also one of the smaller team rosters in the league. Other NVA teams took advantage of them by matching their big guns with the undersized Matadors’ blockers.

Much of the Matadors scoring came from Mauro Issac and Carlos Serrano on the outside, plus Jacob Vander Beek and Jorge Cabrera, who shared time at Opposite.

The Matadors played good defense all year, but they struggled to score points in transition. Because they are not a good blocking team, they had to rely on their defense to create opportunities to score points. Three of the Matadors’ losses ended in 5-sets to Southern Exposure, Tyrants, and The Untouchables, getting as close as possible to having a winning record. But in all three matches Matadors’ hitting and service errors contributed to the losses.

Although the Matadors only won two matches all season, they did have a big win against Team Freedom 3-0, which showed that they could catch any team off guard if they’re aren’t ready.

Prediction: While the Matadors are lucky to be in the playoffs, their luck has run out by the very fact that they’re up against the Ramblers. The only saving grace for the Matadors is that this matchup is a repeat of the last match of the NVA season. Despite losing in three sets, the scores were close at 25-21, 25-21, and 25-22. Therefore, this is an opportunity for the Matadors to avenge that loss. To win this match, the Matadors will need to play almost perfect volleyball. They’ll also need to hope the Ramblers take them lightly and also surrender some free points from hitting errors. But the latter is not likely to happen, and the Ramblers should sweep the Matadors again. Ramblers – 3, Matadors – 0.

To find more articles about the Matadors’ and the Ramblers’ regular season, check out their news section at the bottom of their team websites.

previous
The Matadors Say 'Bon Voyage' to Players Traveling Across the Pond Next Season
next
Finishing Their Last Game of the Season; Jose Mulero Gives His Thoughts On the Matadors Season
PRIVACY POLICY
TERMS & COND...