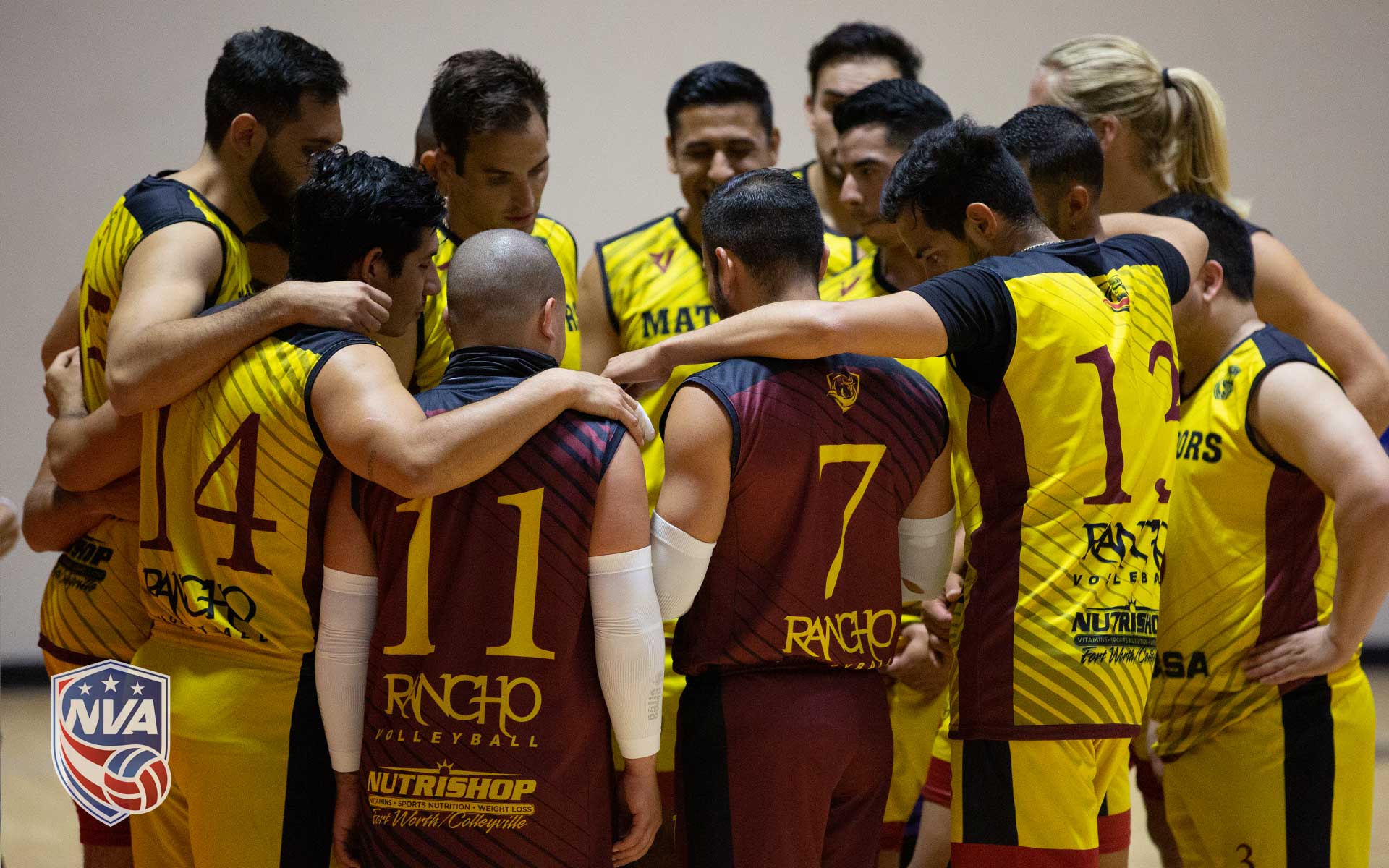 In the first set the Tyrants took the early lead 8-2 on kills by MB # 2 Pasha Zakhir, two blocks by #1 Anthony Robinson, bic by #9 Gianluca Grasso, line kill by #17 Tim Johnson and MB #15 Ryan Maune. Matadors scored their two points from #12 Issac Mauro. Tyrants kept their lead up until the media timeout at 16-12. But the Matadors launched a comeback that began with points from a dump by #1 Jesus Serrano and service ace by Issac. After Tyrants countered with a Grasso kill off the block, the Matadors started another run with a double block by #6 Diego Bustos and #2 Brett Massetti, kill by #17 Jacob Vander Been and service ace by J. Serrano; and then a Bustos one-handed block tied the set at 18-18. Tyrants took the lead again and kept it until 20-20. Matadors took their first lead of the set on a kill by Mauro after a Tyrants’ overpass 21-20. Then at 23-23 the Tyrants committed a service and hitting error that gave the Matadors the 25-23 win.

The second set resulted in the same score but with the Tyrants coming out on top. Like the first set the Tyrants took the early lead 4-1 thanks to a Matadors’ net violations and kill and service ace by Grasso. The Matadors rallied back and took the lead 9-8 after a couple of short runs with a combination of Tyrants’ errors, service ace by Bustos, two kills, block and service ace by Issac. Tyrants rallied back and took the lead at 10-9 after a  Matador service error and Grasso kill. Before the media timeout the Tyrants increased their lead to 19-14 with a scoring run from a sharp angle kill by Johnson, two kills by #16 Daniel Jacobs and kill by MB Maune. The Matadors attempted a rally with kills by Vander Beek, Issac and J. Serrano. But the Tyrants held on to their lead and closed the set with a sharp angle kill by Johnson and service ace by Pasha.

The Matadors dominated set number three with an early lead and never relinquished it. In the early going Matadors scored on two kills and block by Issac, kill by #18 Gabriel Cruz and block by #15 Matrin Petris. The Tyrants scored points from kills by Grasso and Maune but fell into a defensive rut and had trouble scoring points. This gave the Matadors more opportunities to score points and a 16-11 lead at the media timeout. The Matadors increased their lead to 23-13 from Tyrants’ errors and kills by #18 Gabriel Cruz, #9 Jorge Cabrera and blocks by Cruz and Petris. And then won the set after a Petris kill and Tyrants’ service error 25-16.

Set number four ended in the same score 25-16 but different result with the Tyrants taking the early lead and never relinquishing it. A combination of Matadors’ errors, better Tyrants’ defense and kills gave them an 11-4 lead. Grasso and Johnson lit up the court with series of kills and blocks. Matadors traded points with the Tyrants for the rest of the set until 23-15. Then a Jacobs’ kill off the block and Grasso cross court kill won the set for the Tyrants.

In set number five the Tyrants took the early lead 7-2 on kill and block by #22 Austen Lovett and two kills and block by Johnson. Tyrants kept their five-point lead until 12-7. At 13-8 the Matadors rallied back with better defense. Their scoring run began with a Tyrants’ service followed by a Petris block, Vander Been line kill and Tyrants’ hitting error that tied the score at 13-13. The Tyrants won the set from a Matador’s service error and double block by Lovett and Robinson 15-13.

Matadors started the set well with kills by #17 Jacob Vander Been and #12 Mauro Issac and service ace by Issac for a 4-1 lead. Tornadoes scored their first clean point from #20 Felix Chapman. A kill by #13 MB Chike Opurum and Matadors’ hitting error tied the score at 4-4. Matadors built a 2 point lead on back-to-back kills by #15 MB Martin Petris and kill by #1 setter Jesus Serrano after a Tornadoes’ overpass to 9-7. Matadors kept their lead until 21-21. Tornadoes took their first lead of the set from a Chapman kill 22-21. Both teams side-out to 24-24. Tornadoes won the set from two consecutive Matadors’ hitting errors 26-24.

In set number two the Matadors again took the early lead from a Vander Beek kill and increased it to 4-points thanks to Matadors’ service and hitting error and kill by #6 Diego Bustos to 7-3. Tornadoes scored from an Opurum kill and block and Matadors’ service error. Matadors kept their lead until 7-7. Tornadoes took the lead on the next point on a #19 setter Michael Quinones kill after a Matadors’ overpass. After the Matadors tied the score at 17-17 from a J. Serrano ace, Chapman caught fire and scored five of the next seven Tornadoes’ points and created a 4-point lead at 24-20. The Matadors scored only three more points from a Tornadoes’ hitting error and kill by #13 Carlos Serrano. Tornadoes won the match on a kill by #5 Sean Smith 25-21.

Set number three started differently than the first two sets. It was the Tornadoes who scored the first point on an Opurum kill and the lead, which they never relinquished throughout the set. Tornadoes scored on one kill by #69 Steven Roschitz, 4 kills by Chapman and a Quinones’ dump. Matadors scored on points from Issac, Vander Beek and two blocks by #2 MB Brett Massetti. At 11-8 back-to-back kills by Chapman increased the lead to 13-8. Most of the points scored by the Matadors for the rest of the set came from Tornadoes’ error. The only clean points Matadors scored were from C. Serrano kill, Petris block and Massetti kill. Tornadoes’ setter Quinones turned to Chapman again who added 5 more kills. King and Smith added one kill each and the had a double block to make it 24-20. Tornadoes won the set and match on a Matadors’ hitting error 25-20.

Felix Chapman led all hitters with 18 kills and the only player with double digit kills. Sean Smith had 5 kills, Aaron King 4 kills and Chike Opurum 3 kills. Matadors were led by Mauro Issac with 8 kills, Jacob Vander Beek with 6 kills and Carlos Serrano and Martin Petris with 3 kills each. Tornadoes also scored on 2 service aces and 6 blocks. And Matadors on 4 service aces and 6 blocks.

Ramblers scored the first two points in the first set from a Matador service error and kill by #20 Brandon Rattray 2-0. Matadors scored their first clean point on a kill by # 9 Jorge Cabrera 3-2. Both teams traded points but Southern Exposure scored most of their points from Ramblers’ service and hitting errors. Meanwhile the Ramblers scored on kills by #2 Sean Dennis, #15 Kevin Lopez, #14 Ryan Mather and service ace by #8 setter Michael Keegan for a 9-8 lead. After a Lopez kill that gave the Ramblers a 13-11 lead, the Ramblers relinquished the lead to the Matadors 14-13 with a net call and two hitting errors. But the Ramblers took the lead back 19-18 after a Matadors’ hitting error. #12 Mauro Issac tied the score on a cross court kill. Ramblers scored the next three points on kills by Lopez and Rattray and Matadors hitting error to 23-20. Ramblers committed a service error to 23-21. And then won the set on back-to-back kills by Rattray 25-21.

Set number two was a mirror image of set number one with the Ramblers again taking an early lead on kills by Rattray, Mather and Lopez for a 6-5 lead. Matadors scored on two Ramblers’ service errors and kills by Cabrera and Issac. After a Rattray kill at 9-9, Matadors took the lead on a kill by #13 Carlos Serrano 11-10 and then increased their lead to 15-12 after a kill by Cabrera and block by Issac and #2 MB Brett Massetti. After the media timeout at 16-14, a Dennis block cut the lead to 16-15. Matadors answered with a kill by Cabrera. Then the Ramblers tied the score 17-17 on kills by Mather and Rattray. Ramblers tied the set again at 19-19 on another Rattray kill and then took a three point lead on a block by Lopez, Matadors’ hitting error and Rattray kill 22-19. Matadors scored their last point on a kill by Issac to 24-21. And the Ramblers won the set on a kill by Dennis 25-21.

In set number three the Matadors scored the first point from #6 Diego Bustos. Ramblers countered with their first point from a Rattray kill for a 1-1 score. Matadors hung on to a 1 point lead on a block by #17 Jacob Vander Beek, kills by Vanderbeek and Issac. At 6-6 Ramblers took the lead on a dump kill by setter Keegan 7-6. Ramblers increased their lead to 15-12 on consecutive kills by Lopez, Dennis and Rattray. Then added to their lead on another mini run with kills by Mather, Dennis and Rattray to 18-13. Matadors cut the lead to 23-21 with a run of points that started with a Vander Beek kill, two C. Serrano service aces and an Issac kill. Matadors surrendered the next point to the Ramblers on a service error. On the next point Matadors scored on a block by #18 Gabriel Cruz to 24-22. Ramblers won the set and match on the next point from a Mather kill 25-22.

previous
Full Recap of Atlantic City Event
next
Feeling Settled In His New Home With the NVA, Mario Meza Prepares His Team for the 2021 Championships
PRIVACY POLICY
TERMS & COND...