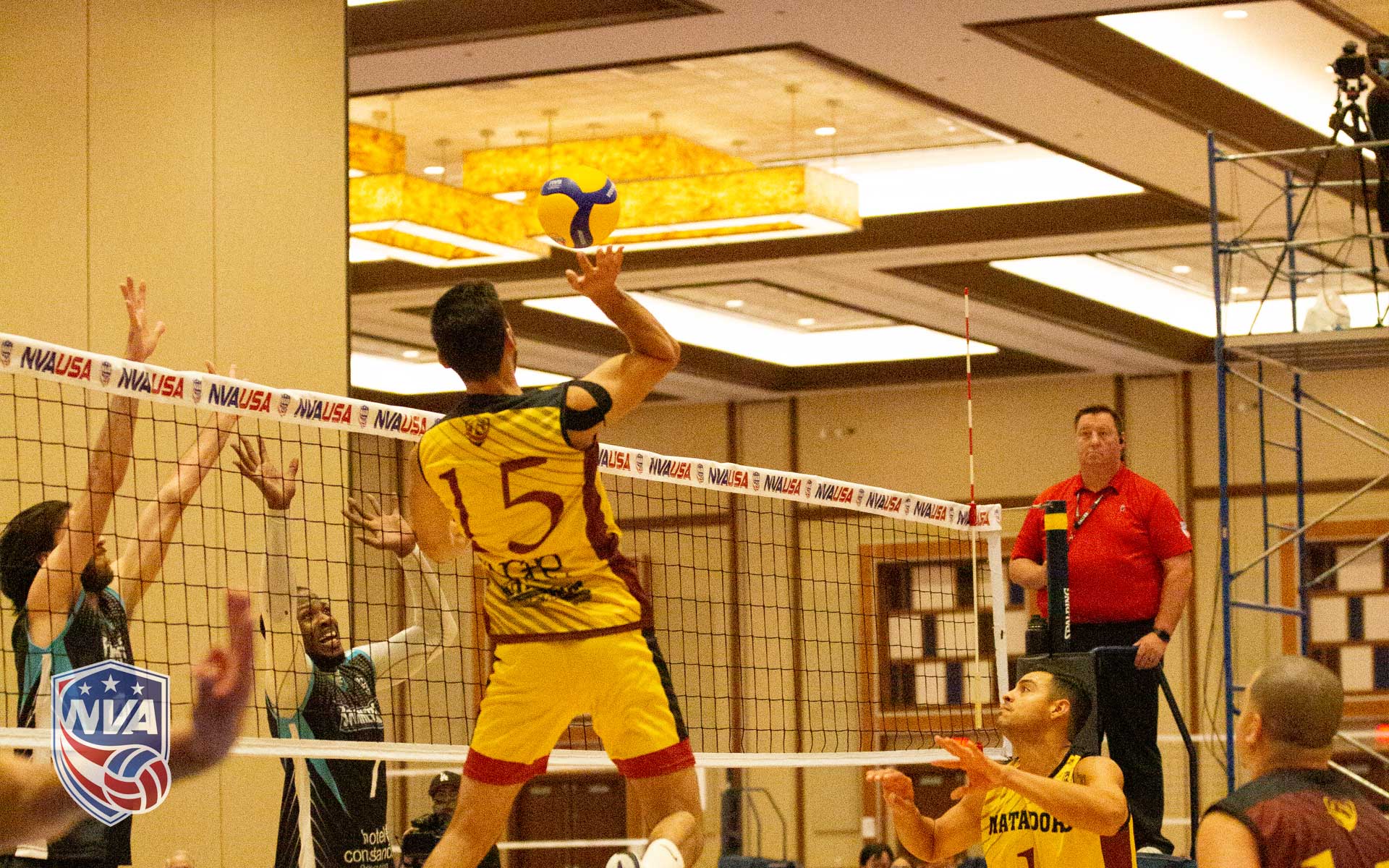 The OC Stunners, coming off a 0-3 start in the first tournament face off against the 2-1 Ontario Matadors. The Stunners started off with an ace from ST43, which was then followed up by an error from Joey Jarvis starting the game off 1-1. The Matadors and Stunners go point for point until a kill by Joey Jarvis takes the teams into the technical timeout, 8-7 Stunners. Joey Jarvis then gets an ace and back to back blocks by Corey Chavers sends the Matadors into another timeout with a score of 12-7. A kill by Alvarao Ascues and Jesus Serrano, followed by a block by Gabriel Cruz allowed the Matadors to close the gap to a score of 12-13, until Corey Chavers answered back with a sideout. The Stunners then create a significant gap led by a block and a kill by Nick Amado, 18-13. The Stunners then maintained their lead until a couple of defensive stops, ending with a kill from Mauro Isaac brought the score up to 23-20. Nick West and then Nick Amado both had kills to end the game 25-21.

Set 2 started off similar to set 1, where both teams were trading points until the technical timeout where the Stunners led 8-7. Jair Santiago then committed a block error, which was followed up by a service ace from Gabriel Cruz which tied the game up at 9-9. Three errors from the Matadors and a block from Nick West gave the Stunners a 14-9 advantage. The Matadors responded with two kills from Mauro Isaac and one from Martin Petris, but the momentum was halted after a massive block by Corey Chavers to go into the technical timeout, 16-12 Stunners. After the timeout, the Stunners picked up momentum with two aces by Joey Jarvis, and two blocks by Nick West to secure a 20-13 lead. The Stunners then cruise to an easy win with two kills by Nick Amado and three kills by Jair Santiago.

Set 3 also started off similar as the first two sets, where both teams traded points into and past the technical timeout. It wasn’t until 9-9 with the Matadors leading that the Stunners started making some plays, with a block by Nick West to grab a 10-9 lead. The Stunners then created some separation again with kills from middle blockers Nick Amado and Nick West, partnered with kills from Jair Santiago to create a five point lead at 18-13. Mauro Isaac and Martin Petris fought hard though, both notching kills to try and rally the team, but it wasn’t enough to catch up to the Stunners offense, final score 25-19.

Set two begins with the score consistently within one point, as the Matadors are able to consistently side out due to the efficiency of Alvaro Hildago Ascues, but were keeping the Untouchables in the game by six serves. The Untouchables lead going into the technical timeout 8-7. Coming out of the timeout, both teams were matched up very evenly, as the spread stayed within one point until the twenties. This was due to the middles of both the Matadors and Untouchables, who were going at each other. After 20-20 Mauro Isaac had two blocks, and followed by a service error from Ian Kapp, the Matadors were able to squeeze out a win. Final score 25-23 Matadors.

Set three started off similar to set two, with both teams trading blows until the Matadors went on a little run thanks to kills from Jacob Vander Beel and Alvaro Hildago Ascues and blocks from Gabriel Cruz and Mauro Isaac, giving them a solid 9-5 lead. The Matadors were able to maintain this lead, although Kyle Schwede tried to will the Untouchables back into the game with three kills, the blocking from the Matadors was relentless as they created some solid separation as big as 17-11. The Untouchables continued to battle back as Ian Kapp, and Jake Milnizak both notched aces and Kyle Schwede got a hot hand offensively, they brought the score within two points at 19-17. The Untouchables then began to make unforced errors with an over call and a double call, while Jacob Vander Beek went three for four in the last points of the game, ending the game at 25-22 Matadors win.

Set four started off with both teams siding out very efficiently, with the Untouchables really riding Kyle Schwede as he notches three kills in the first eight points as they lead going into the technical timeout, score 8-6 Chicago. The Untouchables were able to maintain a two point lead, riding the offensive capabilities of Kyle Schwede and Paul Bilanzic. Ontario was able to slowly close the point spread with blocks from Jacob Vander Beek and Isaac Mauro, but numerous aces from Ian Kapp drove the separation to a five point spread of 15-20. Jacob Vander Beek also started to heat up, as he had two kills late in the game, but it wasn’t enough to slow down the Untouchables. Chicago wins 25-23.

Set five started off with the Matadors gaining a small lead due to two missed serves from Jake Milnizak and Ian Kapp, while Alvaro Hildago Ascues had an ace and a kill. The lead didn’t last long as Chicago started to get in an offensive rhythm as Kyle Schwede and Paul Bilanzik counted for five kills total going into the side switch, score 8-5 Chicago is in the lead. It could be seen as smooth sailing from there as Paul Bilanzik snagged two blocks and Jake Milnizak got two kills as the Untouchables won 15-9.

Set one begins with consistent sideouts from both teams, with Joe Norman producing three kills for Team Freedom and Jacob Vander Beek putting in most of the work for Ontario, unfortunately the Matadors have been consistently missing serves but a net from Mikhel Hoyte give the Matadors the lead going into the technical timeout, score 6-8. The Matadors were able to maintain a three point lead through most of the middle of the match, but two kills from Mikhel Hoyte and an ace from Ronald Dunn tied the game up at 16-16. Both teams continued to sideout at a high rate, taking the game into extra points until a kill from Martin Petris, an ace from Jesus Serrano and a block from Diego Bustas gave the Matadors the win. Final score 27-25.

Set two begins with Team Freedom missing multiple serves, while kills and an ace from Jesus Serrano were able to help give the Matadors a demanding lead going into the Technical timeout, score is 8-3. The Matadors were able to hold a lead as high as 12-7, but Team Freedom started to respond with multiple kills from Joe Norman and Chris Nugent, which complimented the hitting errors performed by the Matadors, score is 16-15 Matadors in the lead. Two blocks from O18 then allowed the Matadors some separation, but relentless sideouts and kills from Mikhel Hoyte and Joe Norman were able to bring it back for Team Freedom as they tied it up at 20-20. The Matadors then had enough with kills from Jesus Serrano and Matt Siefert, and two blocks from O18 ended the game, 20-25 Matadors win.

Set three started off a little more even keel, and forced Team Freedom to put in their starts with Matt Seifert coming back in the middle and Matt Elias coming in to set. Although Team Freedom made these changes the Matadors were able to keep the point spread close as they went up one point into the technical timeout, 8-7. A block from Gilberto Sanchez starts the run for the Matadors, as Team Freedom can’t seem to get out of their own way, making numerous hitting and service errors, the Matadors go up 18-13. The three blocks from Gabriel Cruz and two aces from Jesus Serrano drove the momentum home as the Matadors beat Team Freedom 25-15.